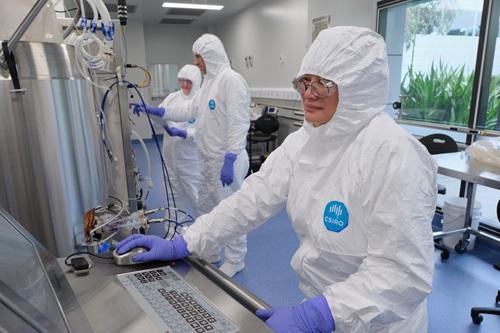 Researchers at CSIRO’s National Vaccine and Therapeutics Lab will turn vaccine and drug candidates into products that can be manufactured in large quantities for clinical trials. The ability to do this in Australia, rather than needing to go overseas, has been the ‘missing link’ in Australia’s biomedical science sector being able to produce vaccines and drugs here.

The new lab follows a successful pilot facility in the early stages of the COVID-19 pandemic, when CSIRO scaled up vaccine candidates that had been developed onshore as part of a national strategy to combat this emerging threat.

The facility was completed with funding from the Federal and Victorian Governments and was officially opened today by Federal Minister for Industry and Science Hon Ed Husic.

“We created the pilot facility in anticipation of disease “X” - an expected but unknown disease that might impact us.  It  turned out to be COVID-19. The past two years have highlighted the importance for Australia to have a robust sovereign capability in the development of vaccines and therapeutics, so we scaled it up into one of our shared National Labs,” Dr Marshall said.

“The problem facing our biomedical industry has been that most vaccine and drug candidates needed to be sent overseas to be produced in large quantities for clinical trials, adding burdensome costs that have crushed many Australian businesses and researchers as the invention languishes on the lab bench.

“This new shared National Lab will help Aussie companies bridge that ‘valley of death’ – the gap between the lab bench and making a product that’s having an impact on people’s lives.”

The new lab provides a significant boost to Australian translational research capacity and advanced manufacturing in biotechnology to benefit SMEs, start-ups and the research sector.

Research Director for Biomedical Manufacturing, Prof Susie Nilsson said the facility was available to companies and researchers around the country as another of CSIRO’s National Labs.

“This new lab has been designed and constructed in accordance with the current licensing requirements of the Australian Therapeutic Goods Administration to produce a variety of biologics, including recombinant proteins and peptides, and viral products,” Prof Nilsson said.

“Our team at the lab will produce drugs in partnership with local industry and enable our partners to progress to both phase one and phase two clinical trials in Australia, and also has the necessary accreditation for Australian companies to participate in clinical trials globally.”