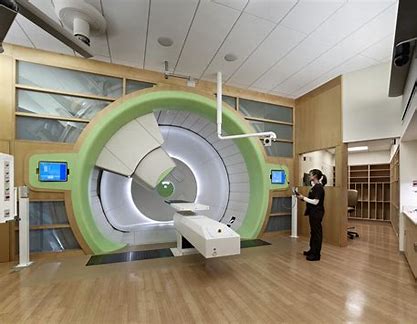 The Varian ProBeam uses sophisticated imaging to see, adapt, and deliver treatment to the designated site, using a powerful particle accelerator called the Superconducting Cyclotron. Protons are accelerated to about two-thirds the speed of light, or more than 160,000 km per second, to destroy cancer cells.

The beam transport system shapes and guides the small beam size necessary for intensity modulated proton therapy (IMPT). This enables clinicians to target very small areas and minimize exposure to nearby healthy tissues, which is advantageous for treating tumors where vital structures are closer together.

This is the first time a patient has been treated on the Varian ProBeam Compact proton therapy system in Southeast Asia. The compact single-room system is equipped with a 360-degree rotating gantry, providing the freedom to image and treat the patient from any angle without repositioning.

The Proton Center resides in the King Chulalongkorn Memorial Hospital (KCMH), providing curative and palliative treatment to a wide range of different patients with complicated conditions, including pediatric. Proton therapy is effective against lung, colorectal and cervical cancers, which are the top three most prevalent types of cancer in Thailand. By 2030, there will be an estimated 55,000 new cancer cases in Thailand each year. 1

KCMH serves several million people in the region2, reducing the need to travel large distances to receive similar treatment. It has an in-patient capacity of 1,435 patients, one of the largest hospitals in Thailand, and is one of Thailand's leading medical school affiliates.

Professor Chawalit Lertbutsayanukul, Head of Division Radiation Oncology for KCMH said, "We're excited to be able to offer this new advanced cancer care treatment to patients. The ProBeam system allows us to treat complex tumors safely and precisely. We look forward to offering more patients in Thailand access to one of the most advanced radiation treatments currently available anywhere in the world."

Kenneth Tan, President of Asia Pacific, Japan & India at Varian said, "We are delighted to work with King Chulalongkorn Memorial Hospital on achieving this important milestone. The new Proton Center will have a positive impact on the lives of patients in Thailand and the region, expanding the availability of this advanced cancer treatment technology to achieve a world without the fear of cancer."